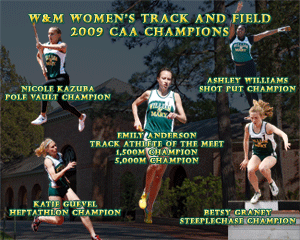 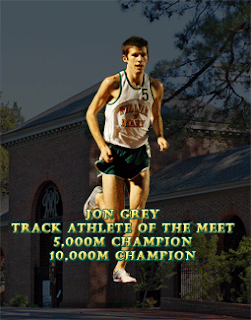 Women 1st, Men 2nd at CAA Meet
The women's team won the CAA meet for the 9th time in eleven years. Emily Anderson and Kayley Byrne 1-3 in the 5K and qualified for the NCAA regional and ECAC meets. Also qualifying for the NCAA meet were Sallie Ford and Sara Lasker who were 2-3 in the 10K. Nicole Kazuba won her 3rd straight pole vault while Emily Jeremiah was 2nd with both meeting the NCAA regional and ECAC standards. Ashley Williams was 2nd and in the hammer while Natalie Baird's toss in the event broke the frosh record. Ashley Madonick broke Uche Uwah's (one of my teammates in the '80s) 400 meter record for her 2nd place and ECAC qualifier. In the 800, Ariel Burbey was 2nd and became 9th all-time W&M with her ECAC qualifier. Anderson won the 1500 qualifying for both the NCAA regional and ECAC as Emily Schroeder's 3rd place notched a ECAC qualifier and is 6th in W&M history. Meghan Burns in 4th, also qualified for the ECAC meet. Improving her #2 all-time W&M performance was Dana Harvey in the 400 hurdles while Betsy Graney won the steeple in an NCAA regional and ECAC performance time. Matching those qualifiers was Ashley Williams who won the shot put. Baird and Carly Morse were 2nd and 6th in the discus, both qualifying for the ECAC meet. Finally Katie Guevel won the heptathlon in a NCAA provisional performance. More

For the men, Jon Grey was the work horse winning both the 5 and 10K (on the same day). Following him in the 5K were Ian Fitzgerald, Colin Leak and Zach Gates in 2nd, 6th and 7th, all of whom qualified for the IC4A meet. Also scoring an entry to the meet were David Adley, Skeeter Morris amd Max Werner who were 2, 5 and 6th in the 10K and Kiernan Lofland who was 2nd in the pole vault. Brandon Heroux broke both the school and CAA record in the javelin and meet both the IC4A and NCAA regional marks. In the 1500, four of the top five slots went to W&M, led by Chris Tyson while Bryce Wilk led W&M's five placers in the top eight in the steeplechase. Qualifying for the IC4A meet was Cam Shriver who won the high jump. More
Posted by Unknown at 7:41 AM