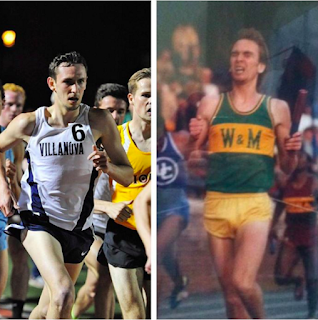 Certainly if one heard that "Malone and Mattis" had a great weekend, you'd think you were back in 1984.  But this past weekend, John Malone's sone, Ben won the Colonial Relays 1500 meters exactly thirty years after John won the same race.   Ben won in 3:45.73.  Above is a great picture showing both of the Malones.

But outshining even Ben's performance was Sam Mattis (son of Marlon '85) who, two weeks ago, set the Ivy League discus record, a performance that also was the second fastest NCAA ever and an American collegiate record.  The throw, 221'3," also was an Olympic Games "A" standard throw.   Watch the throw below.
Posted by Unknown at 7:35 PM